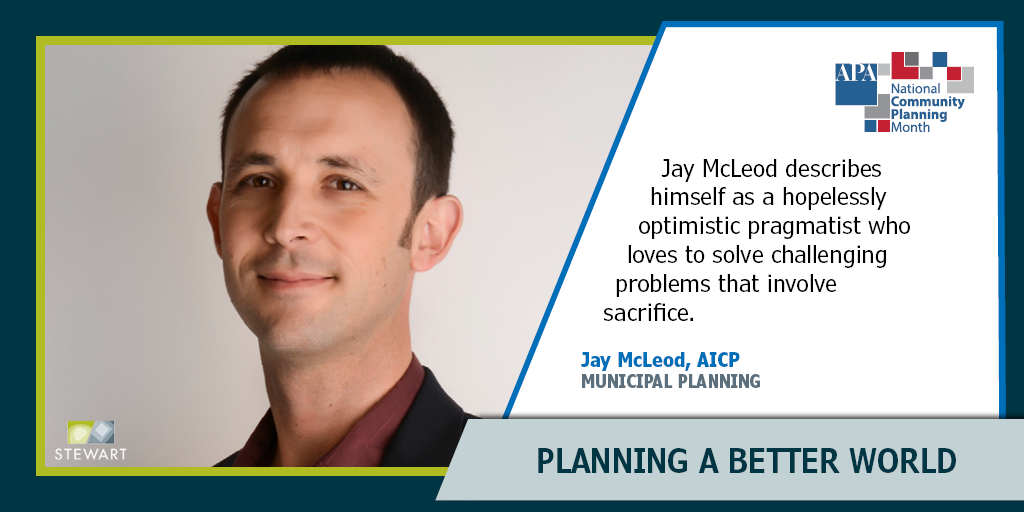 Jay McLeod, AICP, has over 10 years of planning experience in long-range, regional, and local planning. Originally drawn to life sciences before pursuing planning, Jay has master’s degrees in both biology and urban and regional planning. He now focuses on research and analysis to achieve desired outcomes through placemaking and public realm enhancement and design.

Jay recognizes the challenges of blending citizens’ aspirations with the constraints of compromise. “Everyone has big ideas but doesn’t necessarily want to compromise. I love problems that are hard, unsolvable, and involve lots of sacrifice.”

Working with towns to enhance their communities isn’t without its frustrations. “‘We want our downtown to be nice! We want to reinvest in downtown.'” Jay echos the sentiments of some of Stewart’s clients. “And then a developer does come along and has plans for 150 homes and nonresidential spaces in some vacant parcels adjacent to the downtown. But now everyone is saying: ‘Save downtown! Don’t develop this parcel!’ If someone wants to invest money in your downtown, please let them,” Jay urges. “It would be nicer if you had another 300 people who wanted to shop there.”

This is the nutshell of planning: having a wishlist is important, but sometimes you have to give up something to get something in return.

CAMA Land Use Plans and Updates

The planning process for the Town of Duck, North Carolina, was an opportunity for the residents, businesses, and property owners to tell their story and help shape the distinct vision and unique identity for the community. The plan also communicates a cohesive community direction and provides a framework for making land use decisions.

Duck’s project involves coastal planning, resilience, climate adaptation, and mitigation preparation. The town’s sound side is prone to erosion resulting from southwest storms, but environmental restoration is achievable. “It’s a kind of a nexus between the natural world and the changing environment and built environment,” Jay explains.

In particular, Duck’s comprehensive and CAMA land use plan deals with septic system issues and coastal erosion vulnerability to sea-level rise, community character, and connectivity. This unique coastal community requires a unique approach due, in part, to their tourism-dependent economy and character-rich, coastal village aesthetic.

The Town of Swansboro features a historic, working waterfront with restaurants and boatyards. Swansboro is in North Carolina’s intercoastal region. There is a strong sentiment among townspeople to protect the wetland and environment. As the project planner, Jay worked with the town to update its CAMA land use plan.

The plan now complies with CAMA regulations, provides a framework, and establishes priorities for making land-use decisions and public resource investments. Community engagement was comprehensive, with the steering committee members going into the town to provide information about the project, a survey, open house-style workshops, and attendance at summer community events.

Redevelopment is becoming the rule rather than the norm in the Town of Carolina Beach. To prepare for and ensure continuing prosperity, Jay, as the project manager, is assisting the town with updating their CAMA land use plan, which guides future land use decisions and policies relating to development, the environment, and other state-mandated requirements.

The plan has a number of functions for Carolina Beach, including regulating development that impacts public environmental resources in coastal communities. The town is driven by three broad interest groups—residents, businesses, and tourism. Finding the balance is key as the community furthers the broader conversation about their collective future vision.

Stewart worked with the citizens of Carolina Beach to help devise plans to protect the tourist-friendly downtown character while maintaining the appearance of being a family community—even though a large percentage of the town consists of rental homes. However, the town faces some resistance from the commercial sector to addressing environmental issues, such as street flooding during king tides.

Through the scope of his career, Jay remains optimistic that his and the efforts of Stewart’s Municipal Planning practice will bear the fruit of more towns and cities adopting environmentally-sound planning across North Carolina.