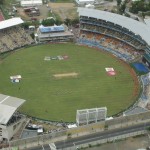 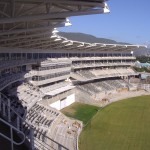 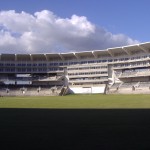 Jamaica was one of eight territories chosen to host matches for the 2007 ICC Cricket World Cup championship. In preparation for the eight preliminary round matches to be played at Sabina Park, renovations to the stadium complex had to be made.

Phase I involved the renovation of the existing Hedley stands, built in the 1950s. Upgrades included the addition of elevators and new restroom and concession facilities, as well as the modernization of VIP suites.

Phase II consisted of structural engineering design services for the new North Stand, including associated new VIP and media areas, new broadcast facilities, new athlete facilities, and access improvements. The design for the new grandstand was driven by spectator sightlines. Given the tight footprint available, this resulted in a five-story, parabolic structure constructed with a reinforced concrete system.