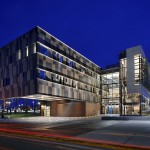 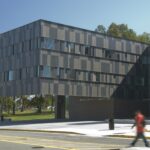 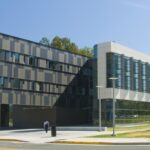 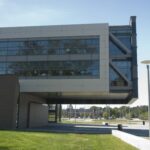 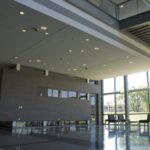 This three-story, 65,700-square-foot building features a 52-foot cantilever—a highly complicated structural feature that makes the building visually unique. It presented numerous design challenges. First, the cantilevered portion of the building had a back span of only 50 feet (a two-to-one ratio is normal). This made it difficult to balance the cantilever with the resisting hold down. Second, the back span contained a large lecture hall, which prevented the use of interior columns. Third, a stairwell was present at the base of the cantilever. And finally, the small office spaces in the cantilever prevented the use of interior trusses.

The civil scope of the project consisted of site circulation improvements, which included parking adjacent to the building for faculty and pedestrian walks, as well as campus infrastructure improvements.