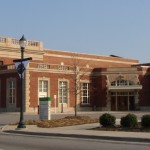 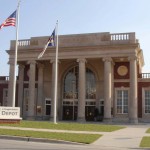 With its classical lines and quality construction, the historic Greensboro Depot was a downtown treasure. The building’s function had become obsolete, but it breathes new life today as a multimodal transportation center.

City bus service, Greyhound and Railway bus services, and Amtrak service are all combined in one facility on this 14 acre parcel in downtown Greensboro, North Carolina. Stewart provided total site redevelopment for the renovation and expansion of the historic Greensboro Depot to accommodate these services in one consolidated facility.

The first phase of work included program development, coordination with user groups and Norfolk Southern Railroad officials, as well as the development of conceptual site plan alternatives and associated cost estimates. Stewart’s survey staff developed a detailed existing conditions / as-built survey, which was used as the base for development of construction documents for the site related improvements.

City of Greensboro Department of Transportation