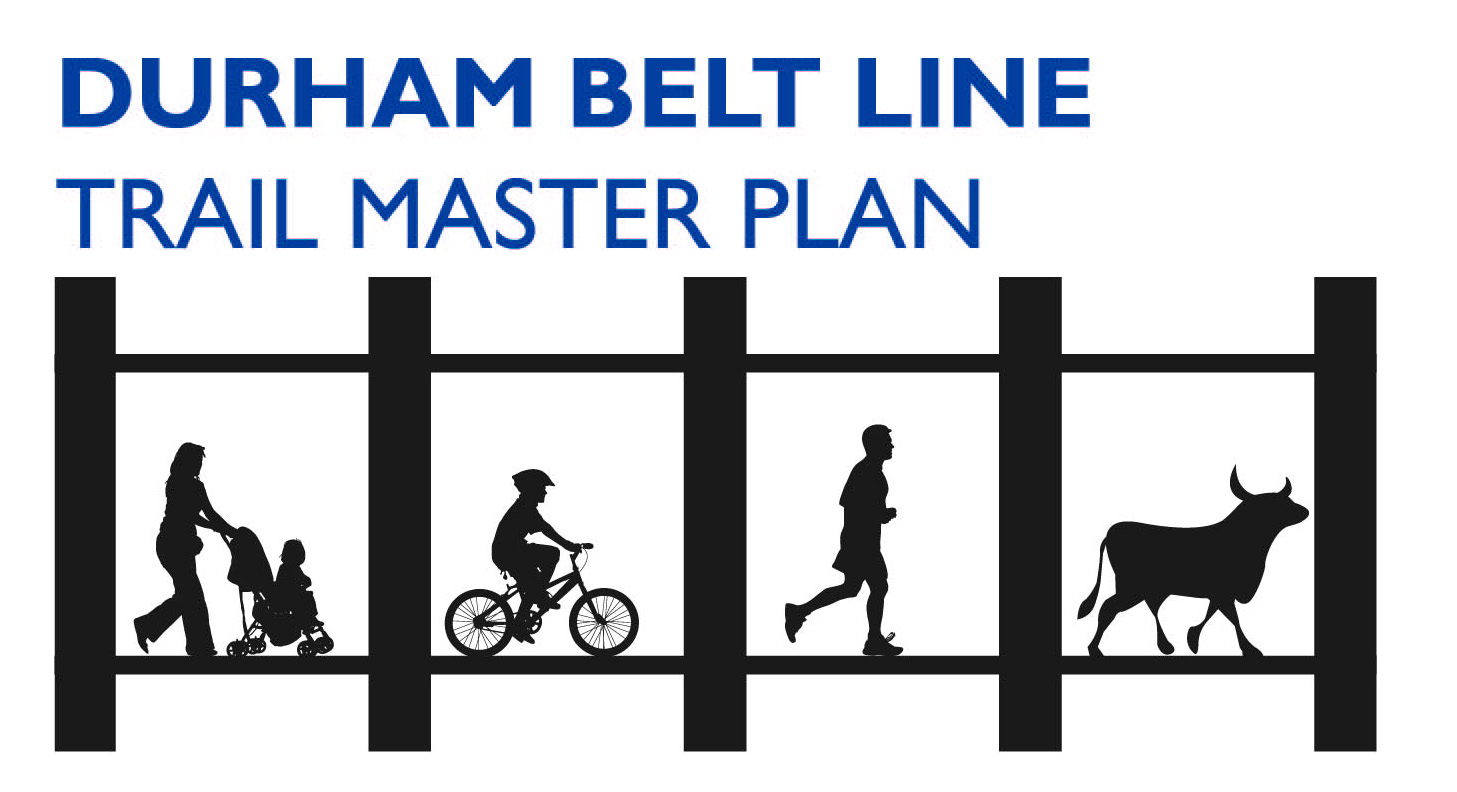 At Stewart, our Bicycle and Pedestrian Practice has been leading an effort to develop a Durham Belt Line Trail Master Plan for the City of Durham. With National Bike Month well underway and the draft master plan newly released, there’s perhaps no better time to dive into the plan and benefits of the proposed Durham Belt Line.

The Durham Belt Line is envisioned to be a vibrant green space connecting communities to the heart of Durham. The project will transform an overgrown railroad into a trail and a series of public spaces, traversing 1.7 miles of abandoned railroad right-of-way – from Downtown Durham to Avondale Drive in the northeast. The trail will connect the Duke Park, Old North Durham, Trinity Park, and Pearl Mill Village neighborhoods to downtown Durham, transit options, and jobs throughout the Triangle. It will also function as a key link in a regional greenway system stretching from Harris Lake Park in Wake County in the south to the Durham-Person County line in the north and likely serve as a signature segment of the East Coast Greenway, a 3,000-mile trail that connects Maine to Florida. 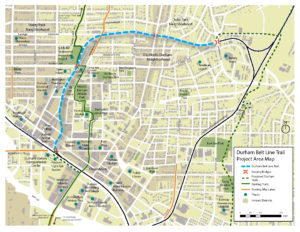 The Durham Belt Line will transform an abandoned rail line that runs to the heart of Downtown Durham and improve connections between neighborhoods. (Click on images to enlarge.)

The design of the Belt Line was influenced by world-class urban trails and greenways, which are transforming cities throughout the country. Urban trails like the Durham Belt Line take people on a journey and change the way people experience a city. The High Line (New York City), the 606 (Chicago), the Atlanta Beltline, the Indianapolis Cultural Trail, and locally the Greensboro Downtown Greenway provided inspiration.

Public outreach activities have shaped the design of the trail through the planning process including community meetings and events, steering committee meetings, walking tours, and stakeholder conversations. The outreach pressed the design team to consider:

To minimize conflict by users, the Preferred Cross-Section of the Durham Belt Line includes a 12ft bicycle zone separated from an 8ft pedestrian zone as well as planting areas and lighting.

The Durham Belt Line will be constructed on a right-of-way that is wide enough to present opportunities for seating and plazas. These areas will provide places for residents and visitors to gather, linger and connect with each other and the history of the city. The trail also passes by city-owned property that could be converted to new parks. These public spaces will provide an amenity for existing neighborhoods and new development.

According to the Centers for Disease Control and Prevention (CDC), 22% of adults in the City of Durham get no leisure time activity. After completion of the trail, the number of households with access to open space will increase by 52%, and studies show that access to parks and open space, like the Belt Line, can improve health outcomes2.

Durham is evolving into a cultural destination. Visitors in 2015 had an economic impact of $823 million. The Belt Line, along with future extensions south to the American Tobacco Trail (ATT), will connect a number of destinations and provide a destination in itself. It will be a trailhead for bicycle trips to the American Tobacco Trail, a place for an evening stroll after dinner, a vantage point to see the historical architecture of the Warehouse District, and vistas for catching a view of the evolving Durham skyline.

An economic study conducted as part of the Belt Line Master Plan showed that the tax value productivity in Downtown Durham is exceptional compared to every other area of the city. The downtown represents only 4% of the city’s land area but accounts for 28% of the property value. The Master Plan recommends walkable mixed-use development types along the trail to maximize return on investment. A study conducted as a part of the plan showed that annual tax yield on undeveloped land near the trail could amount to millions of dollars in revenue if this strategy is used over suburban commercial-style development or single-family homes. 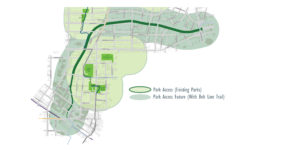 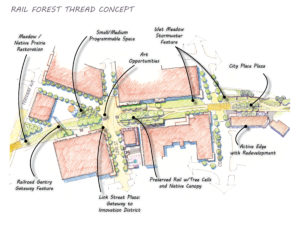 Part of the design challenge was to turn a corridor that served as a “backdoor” for nearly a century into a “front door.” This concept shows how the Durham Belt Line can provide a gateway into Durham’s Innovation District and how new trailside infill development can take advantage of the trail as an amenity.

Learn more about the Durham Belt Line and view the newly released draft plan at https://https://issuu.com/stewartinc/docs/durham_belt_line_trail_master_plan_.org/. 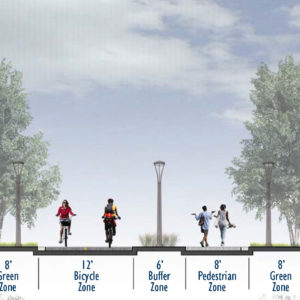 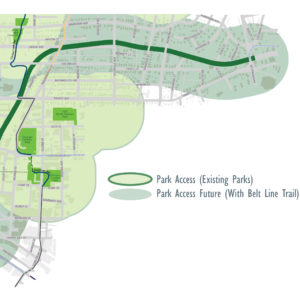 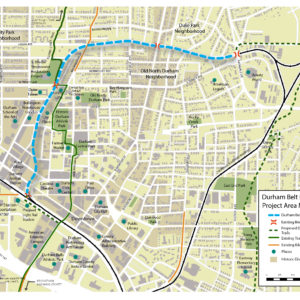 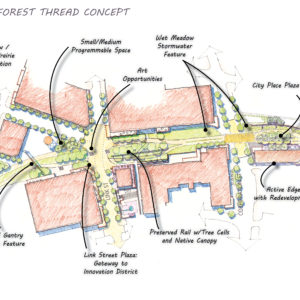